There's a time when I give a concert....I like to have as many people who would like to come and enjoy the show. And there's a time when you like to be in private...when you cut the light. That's your private space."

“[…] I’m just a person who wants to be honest and do good and make people happy and give them the greatest sense of escapism through the talent that God has given me, you know? That’s what my heart is, it’s all I want to do, that’s all. And I just want to say, ‘Look, leave me alone and let me do what I want to do and just share and give and put the smile on people’s face and make their heart feel happy.” - Michael Jackson in "The Daily Mirror" Magazine Interview (April 1999) 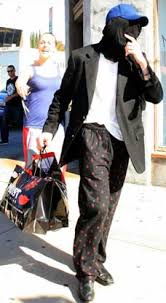 COLACELLO: It seems that what really motivates you is your desire to entertain people, to please people. What about fame and money? Could you imagine not being famous or does being famous bother you?

JACKSON: It never has bothered me except sometimes when you want peace. Like you go to the theater and you say, “Nobody’s bothering me tonight, I’m wearing my hat and glasses and I’m going to enjoy this film and that’s all there is to it.” You get in there and everybody’s watching and staring at you and at the climax of the film somebody taps you on the shoulder for an autograph. You just feel like you can’t get away . . .

"There's nowhere in the world I can actually go and have privacy. The thing that hurts the most is the fact that your privacy is taken away from you. To use the silly expression, you live in a fishbowl, but it's true. I do disguises... People know them all, it's very hard, very hard. […] Fat suits, buck teeth, glasses, afros, prosthetics, make-up jobs, everything. Just to sit in the audience and experience it the way an audience would experience a show; I want to feel how they feel.”

“Oh, boy. Who would I like to slap? Let me see.. [laughs]... I think I'd find one of the tabloid paparazzi and kick his ass, moonwalk style. I'd really like to knock them off one of those little scooters they ride around on, I really would, knock the cameras right out of their hands. They're so annoying. I'd go for them first, yeah. They drive you nuts. You can't get away from them. It's terrible.”

"The price of fame can be a heavy one. Consider, that you really have no privacy. I´ve been accused of being obsessed with my privacy and it´s true that I am. If you were to ask me why I wear sunglasses in public as often as I do, I'd tell you it's because I simply don't like to have to constantly look everyone in the eye. It's a way of concealing just a bit of myself. There is so little privacy in my life that concealing a little bit of me is a way to give myself a break from all that. I like my privacy."

Michael Jackson in his book "Moonwalk"

"He loved going places but he couldn't go unless he was incognito. I remember waiting for him one time outside a movie theatre to go see Beowulf at Universal Studios in Hollywood, and he said, 'I'll meet you in front of the theatre.'

"I don't know what I was thinking. I was looking for Michael Jackson to show up to meet me. I'd been with him many times before when he dressed up - he went to the theatre in New York as the Mata Hari's daughter once. You wouldn't believe some of the outfits that we saw him in.

"So I'm standing around and looking around. There were young tourists running up to me to get my autograph because they recognized me from High School Musical, and this old, old man in a wheelchair is getting closer and closer to me until I just went, 'You son of a gun!' It was Michael just laughing under his plastic face.

"I went over and wheeled this old man into the movie theatre - it was the only way he could get in and more importantly get out. If we could sneak him in, if people knew that he was somewhere it was almost impossible to get him out."

"I do disguises for different reasons. I like to study people – be like the fly on the wall. Even if it's two old ladies sitting on a bench or some kids on a swing. Because I don't know what it's like to fit in an everyday life situation. One time I was in a record store, completely disguised, and these girls were pulling out my album, talking all about me. I was literally next to them. It was wonderful. I loved it. But if I go out as myself, I can't have fun. People always say, "Why don't we just go to a party?" Soon as I step in, the party's over – for me. It's a party for them, but they are all putting their cards on my face, saying, "Remember me? I met you four years ago at…" and I say, "I don't remember." So I can't enjoy the experience. They play all my songs. I didn't come to hear my music. And everybody starts chanting "Dance!" "Well, I want to see you dance for a change."

I took my baby on a river boat cruise And she was well aware I was excited about the way things could have been Cause in it I don’t care I want a face no one can recognize, in disguise Someone called out my name They thought of taking pictures, autographs, then they grab My joy has turned to pain

I’m on the cover of the magazine, what a scene They know my every do’s “Just sign your name on the dotted line, you’ll be fine” – that always bothers me Get in your car, you wanna take a ride, look behind Someone is following you You try to get away you turn real fast, but too bad They know your every move!

My father always told me You won’t live a quiet life If you’re reaching for fortune and fame I feel the pressure setting in, I’m living just to win I bleed all this pain, don’t you ever complain!

I’d like to take some time and get away, then they’ll say, Is that boy still alive? The week in village … what a thrill Only the strong survive

My father always told me, You won’t live a quiet life, They startin’ to wonderin’ where have you been? I feel their envious looks at me Their mistaken jealousy Then stand here in my shoes And then get a taste of my blues!

Michael Jackson in his song Price Of Fame

Nate Giorgio, artist, who painted many paintings for MJ